Node-RED 0.20 is now available to install.

This release comes just as we launch our 2019 Community Survey.

We speak to lots of you in Slack and the Forum and love hearing about how Node-RED is being used. But we know there’s a much larger community of users and developers out there who are using Node-RED that we haven’t spoken to.

This survey is an opportunity for us to get a better understanding of who our users are, what they do with Node-RED and to help the project stay pointed in the right direction.

Please spare us 10 minutes of your time to fill in the survey here: https://tiny.cc/NodeRED2019Survey

The survey will be open until mid-April at which point we’ll compile the results into a report to be shared on the blog here.

Take the survey today! - and spread the word to your friends and colleagues to help us reach as wider an audience as possible.

Unlike previously releases, we’ve already done a few beta releases of 0.20 over the last couple of months. This has allowed us to get more feedback on the new features and flush out lots of edge cases before making it more widely available.

Thanks to everyone who tried the beta - it’s definitely an approach we’ll continue with future releases.

Node-RED 0.20 requires Node.js 8.x or 10.x - we no longer support running it on anything earlier.

The 0.20 code base has gone through a significant restructuring so that it is now split across multiple modules. Whilst this shouldn’t mean much for the majority of end-users, it is a major step towards version 1.0.

Part of this work includes putting together documentation for the various modules and the APIs they expose. This is now available here.

There’s lots still to document about how these modules can be used individually. If that’s something you’re interested in seeing, please get in touch.

Redirecting status events from inside a subflow

When using context within a subflow, it is now possible to access the context of the flow the subflow instance is on. This is done by prepending the context key name with $parent.. For example, if a flow has a context value of foo, a subflow could use flow.get("$parent.foo"); to access it.

These properties can be set on the Subflow template, but also on individual instances of the subflow. That means you can design a subflow that can be customised on a per-instance basis. Unlike the process-wide environment variables which can only be Strings, the env vars defined on a subflow can be multiple types - string, number, boolean, JSON, Buffer or even a reference to another env-var. This last option means you can create composite env-vars made up of other env vars… and oh my just think of the possibilities. 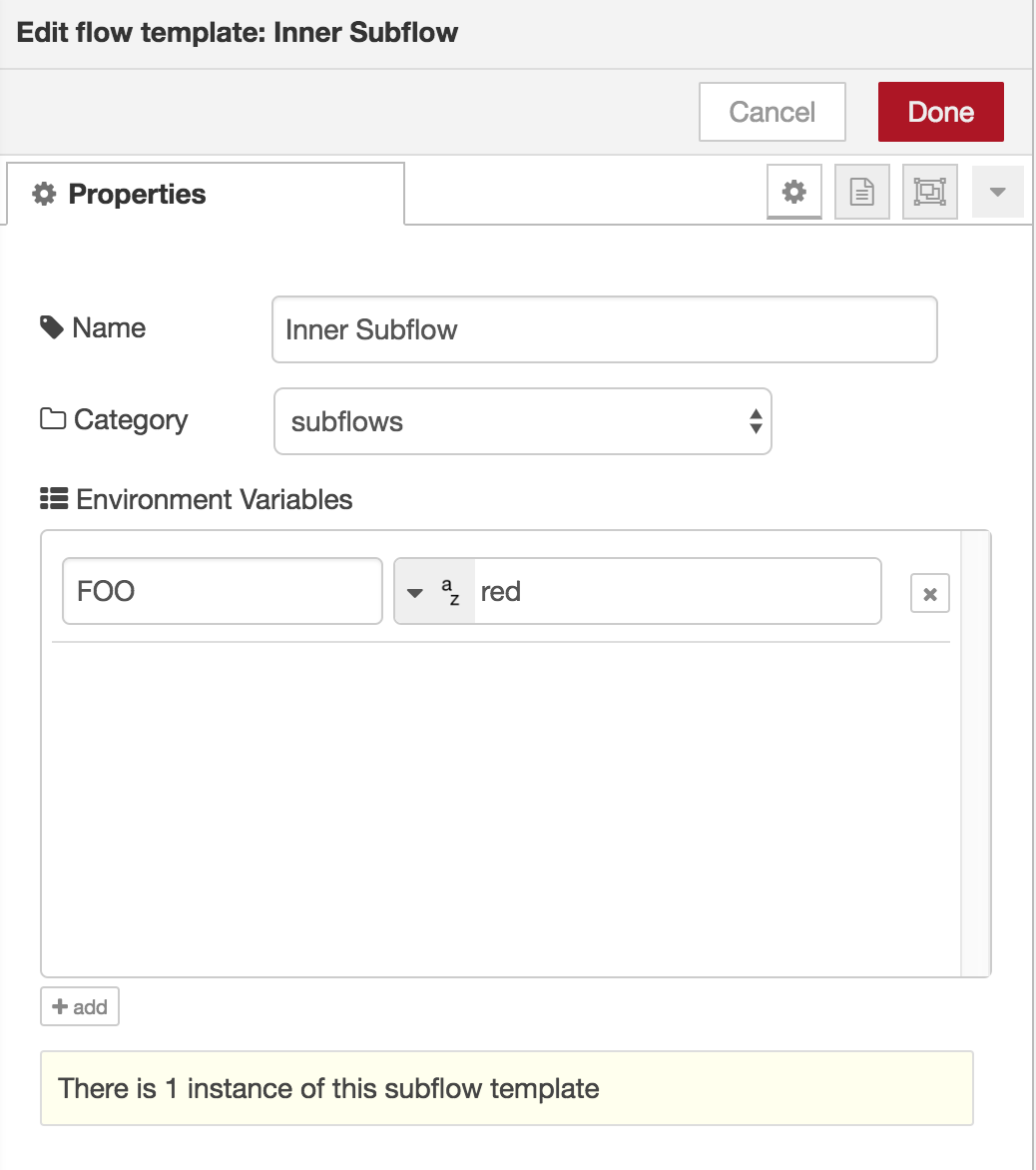 Here an environment variable FOO is defined with the value "red". 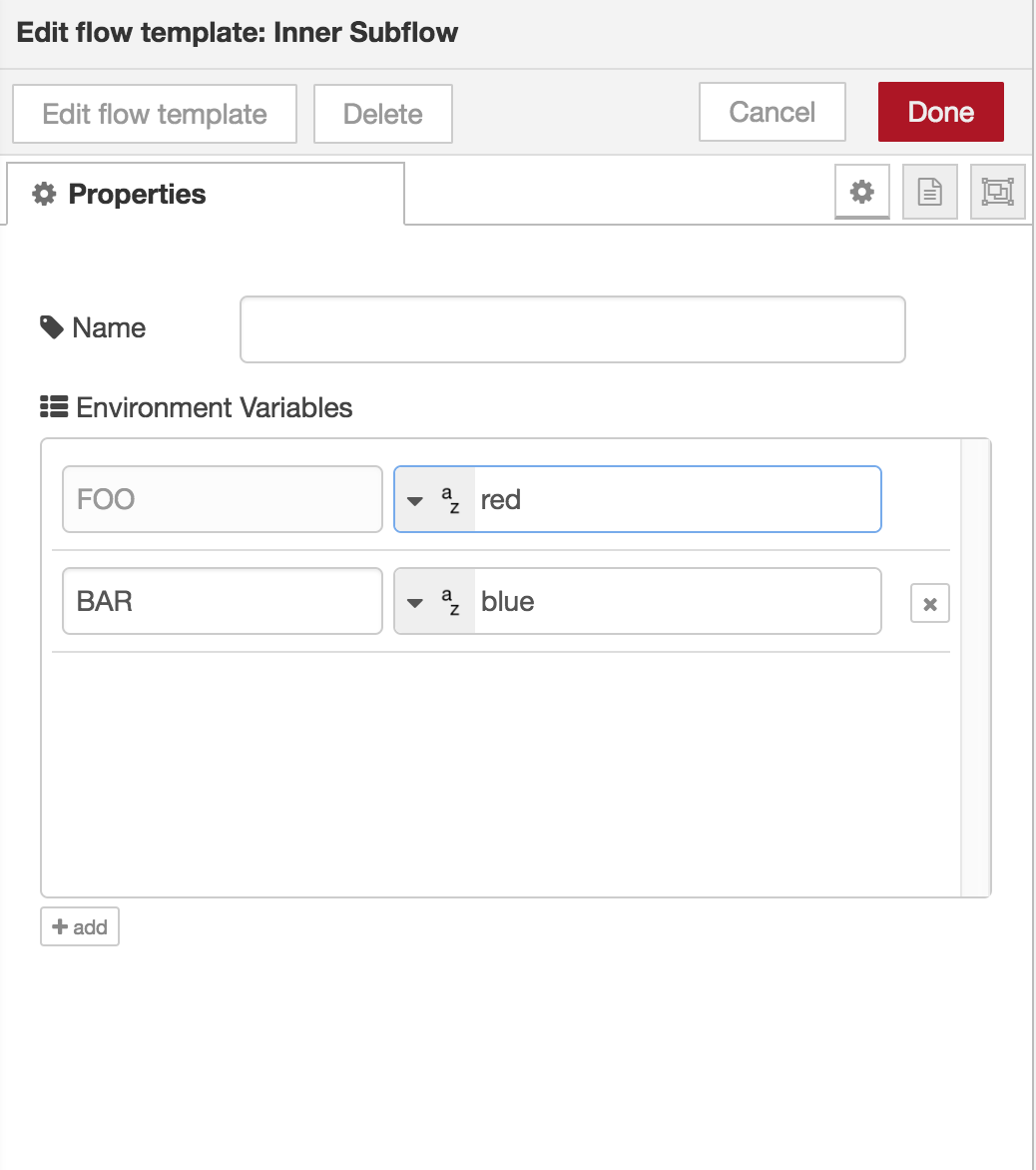 When editing the subflow instance, the env var table lists the env vars defined on the subflow template. In this image you can see FOO is listed. Its value can be customised for this instance - if you do customise it, a button appears to the right that lets you revert it back to the value the parent subflow defined. You can also add new env vars just for this instance - as shown above with BAR.

These new subflow features address a lot of common requests and feedback we get about them. We think this will make them a much more powerful tool within Node-RED.

When you select a Link node it now shows an extra port from which you can click and drag a wire to another Link node in order to join them. As before, these link wires are only displayed when you have a link node selected.

The Change, Switch and Join nodes have had some performance improvements applied following a performance regression in 0.19 - particularly if they interact with context or use JSONata expressions.

The edit dialog for nodes has been reworked as a set of tabs rather than collapsible sections. This means we can add new sections to the dialog without losing valuable vertical space.

One of these tabs is a description field so you can add markdown-formatted help to any node. The contents will get displayed in the Info sidebar when you select the node.

To help with the markdown formatting, a new toolbar has been added to the dialog. It can also be expanded to a full-screen editor with a preview of formatted text.

With 0.19 we introduced the ability to customise a node’s icon. This has been expanded to include selecting from the range of icons provided by Font-Awesome v4, excluding any brand-specific icons.

New flow tabs can be added by double clicking on the tab bar. The tab will get inserted where you click - such as in between two existing flows.

Cmd (or Ctrl) - Clicking on a tab selects it. You can select multiple tabs. Once selected, pressing delete will delete the tabs.

Opening the export to clipboard dialog (from the menu, or Cmd/Ctrl-E) will let you export the selected tabs.

A project of the OpenJS Foundation.